SNK All-Star Fight is a mobile arcade game. According to the gameplay, we can choose a boy or a girl from an Asian city of the future, they will control a group of heroes. Judging by the plot, we should advance to the first places of the local tournament. SNK All-Star Fight pleases with comic book style inserts and text dialogues with voice acting for each character. Contractions take place in automatic mode, we can only watch and accelerate them, even the characters burn through the ulta themselves.

SNK All-Star Fight is an interesting mobile game in the action genre. The game offers a fascinating adventure for a single player. The main style of the project is anime, which means that the player should expect cute waifus with an emphasis on teenage and adult audience. Also, this project draws inspiration from genres like fighting, turn-based. On this page you will find all the information about this game, namely the release date, platforms, videos and screenshots, publications and more. 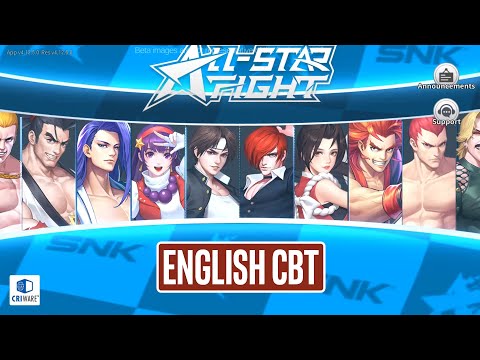 SNK All-Star Fight can be downloaded on Android

SNK All-Star Fight is a mobile game that has entered CBT phase. It's an arcade hero-collector with beautiful graphics and auto-gameplay. We have to choose a boy or a girl as the main character. Pla...